Hi All and Happy October!

I absolutely love this time of year. The leaves are just starting to change on some of our trees, although it will take a tad bit longer for the rest of them to catch up. The nights are definitely cooler and the days are too, which is a relief after an unprecedented, super hot summer. Pumpkin everything has come out…although not all of it good. Have you tried Halo Top’s Pumpkin Pie Ice Cream? I’m not a fan because of the pieces of pie crust (think soggy pie crust…not crisp and flaky) in it. Plus, I think there are some things you just shouldn’t mess with from the original flavor. Pumpkin Oreos anyone?

One of the other things I love about this time of year is getting to wear socks again! Yep…it’s all about the socks. And due to being sick last week, I was able to finish another pair, just in time for this cooler weather! I’ve talked about them many times on the blog. I actually started the first sock back in September of 2015. Socks were not really a priority at that time, even though I was blogging about them every Thursday. I finished the first sock in March of 2016 and cast on for the second. Then I put them away for a really, really long time.

Last month, while trying to determine which sock pattern I wanted to work next, I finally decided to pull out that second sock and get it done. I was tired of them taking up a pair of needles and a project bag. Plus I wanted that extra yarn for my sock yarn blanket 🙂 I also made a solemn vow to myself to finish everything in my UFO and WIP projects before starting anything new. This pair of socks is the reason why I always knit them TAAT* now as I never want to get SSS** again. I’ve even blocked them and taken pictures. Go me!!!

Techniques Learned: With the first sock, I learned how to do my first Heel Flap, Heel Turn and Gusset. I’ve used all of these techniques multiple times since then; however this was my first! I also learned that there are some mistakes you can live with and some you can’t. If you look very closely at the sock on the right foot, you’ll see that I got off pattern on the foot section. I decided I can live with it since I’m the only one that will ever see it. 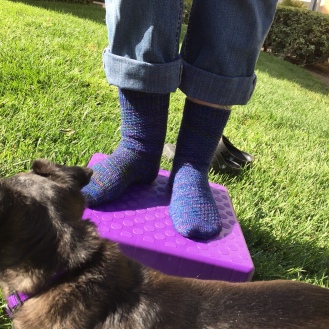 I had to throw that last picture in there because my dog photo bombed me 🙂 Hey! Did you know that my friends and I blog about our sock knitting the first Thursday of every month? If you would like to join us, please let one of us know in the comments and we will be happy to link up with you! In the meantime, check out my very creative knitting buddies to see what they are up to this month! I will link straight to their posts as soon as they blog about them.

Katherine at fiber and sustenance

Until next time, Happy Knitting!

This site uses Akismet to reduce spam. Learn how your comment data is processed.